In July and August, when a public outcry rose over late mail, there was indeed slower delivery from the United States Postal Service.

Since then, on-time delivery of the mail has improved slightly. Last week, in a sample of more than 200,000 letters, performance was about as good as it was in 2019? if true? UPDATE SUNDAY

//In last week’s sample of more than 200,000 letters, performance slowed noticeably after improving throughout the month of August. Roughly 37 percent of first-class letters mailed long distances and more than half of the same letters sent short were delayed by at least one day.//

How often was long-distance mail late?

The late-summer slowdown was noticeable on a national scale: to companies that send thousands of pieces of mail daily; to software firms that track that mail; and to the Postal Service itself, which shared data about the delays with Congress in late August. As an election looms in which more Americans than ever are expected to vote by mail, the July episode highlights how decisions about postal operations can have significant and immediate consequences.

The data here, covering more than 28 million pieces of first-class letters tracked by SnailWorks, shows how on-time delivery declined noticeably in July after the arrival of Louis DeJoy, the Trump-aligned postmaster general, and the start of policies to trim transportation costs. That drop in national performance was more significant than at any other point during the coronavirus pandemic.

“We had a wave of our members, hundreds and hundreds of locals, telling us there were service problems a month ago,” said Jim Sauber, the chief of staff for the National Association for Letter Carriers. “And that has largely dried up.”

During the summer slowdown, first-class mail that is projected to take three days to deliver — typically traveling to another state or across the country — was on average less than one day late. Nearly all of the long-distance mail shown here arrived within one week.

Mail traveling shorter distances, which the Postal Service aims to deliver within two days, also slowed this summer, with most delayed mail arriving one day late.

How often was local mail late?

“While it doesn’t show everything is wonderful, it shows everything is at least OK,” said Dave Lewis, the president of SnailWorks, which tracks commercial mail for businesses, nonprofits and political campaigns from both parties.

With the help of SnailWorks, we are tracking about 55,000 pieces of mail a day originating in four cities around the country and sent nationwide. The data is not fully representative of the postal network, but it tracks national trends measured by the Postal Service, and it will allow us to continue monitoring mail service as the election approaches. Updates over the coming weeks will reveal whether delivery slows again, stays about the same or continues to improve.

The recent national slowdown dates to early July, around the time that postal workers were ordered to change the longstanding practice of holding trucks at sorting facilities until all of that morning’s mail was on board. Beginning in July, trucks were ordered to depart on time, potentially leaving some mail behind.

“I’ve been working for the post office for 45 years, and I’ve never heard of that type of action,” said Paul Hogrogian, the president of the National Postal Mail Handlers Union. “It’s against every instinct in our body to leave mail behind.”

Former postal officials, postal workers and private companies that track the mail all pointed to that policy as having a significant and almost immediate impact on the timeliness of mail delivery.

“This is the only rational explanation,” said Michael Plunkett, the president of the Association for Postal Commerce and previously an employee with the Postal Service for more than 25 years. He noted that mail that wasn’t sorted on time for a departing truck would most likely remain in a processing facility overnight, be sorted again the next morning and arrive a day later.

“It was a sudden and unexpected but observable and measurable decline in service,” he said of the change.

Experts said other changes — like declines in approved overtime for mail handlers, and reductions in mail-sorting machines used in some plants — might have also contributed, but probably had smaller effects.

In mid-August, Mr. DeJoy promised to suspend several policy changes until after the election, keeping all mail processing equipment and plants online, and keeping post office hours unchanged. “We will continue to bring disciplined focus to stabilizing operations across processing, transportation and delivery within our network to fulfill our obligation and commitment to provide consistent and reliable service,” said David Partenheimer, a spokesman for the Postal Service.

The Postal Service has also experienced local, but more severe, disruptions in mail because of coronavirus outbreaks in New York, Philadelphia, Detroit and other hard-hit parts of the country. Over all, the pandemic does not appear to have had a large effect on first-class mail nationwide. But in locations where many postal workers have been sick or unable to work, delays might have stretched well beyond the national numbers shown.

“For those who are genuinely worried that there’s a broad crippling of the Postal Service’s capacity to do its job, these data help answer that question,” Kevin Kosar, a resident scholar at the American Enterprise Institute, said of the SnailWorks data. But they don’t fully capture how bad things have been in coronavirus hot spots, he said, “and all mail delivery is local.”

In the spring, long-distance mail was delayed in some places, including virus hotspots, but the widespread slowdowns didn’t begin until the summer 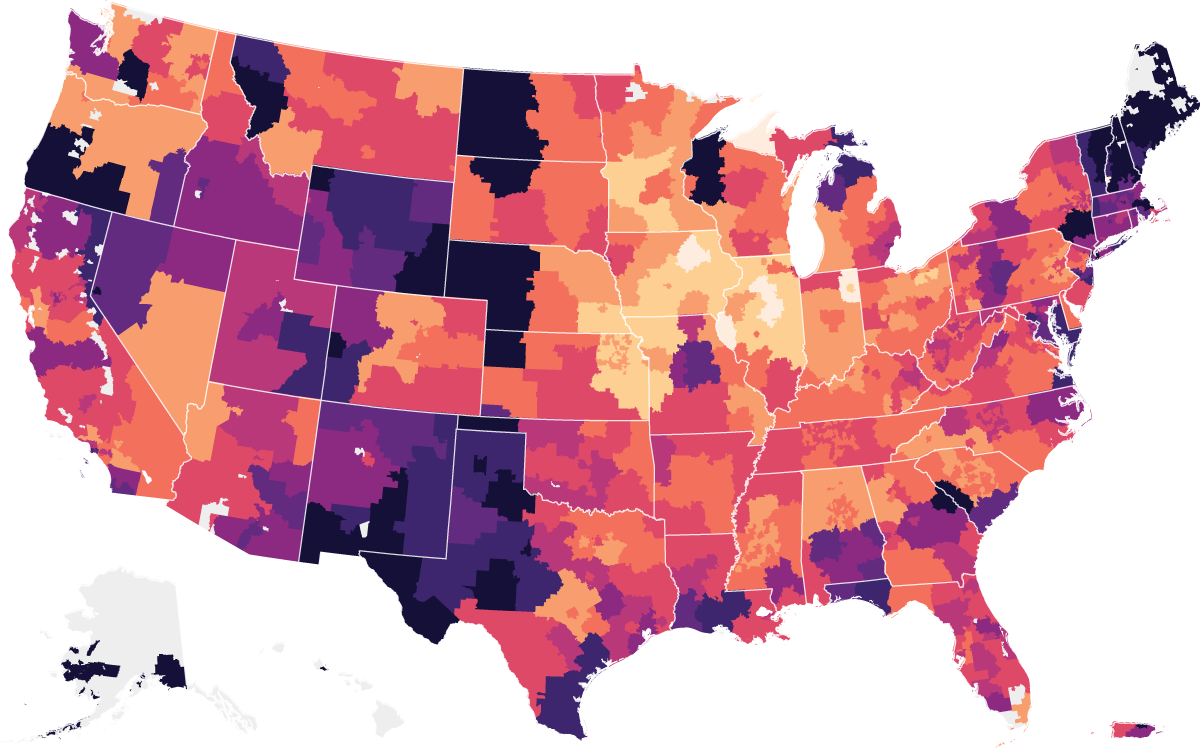 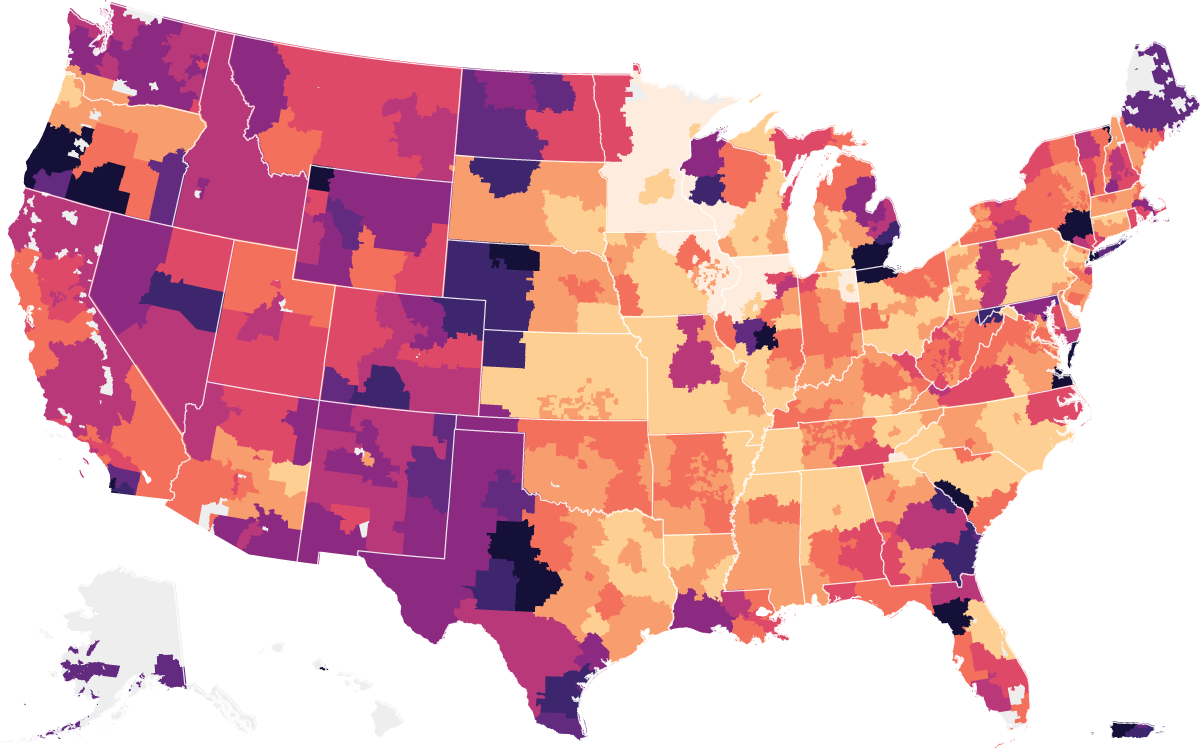 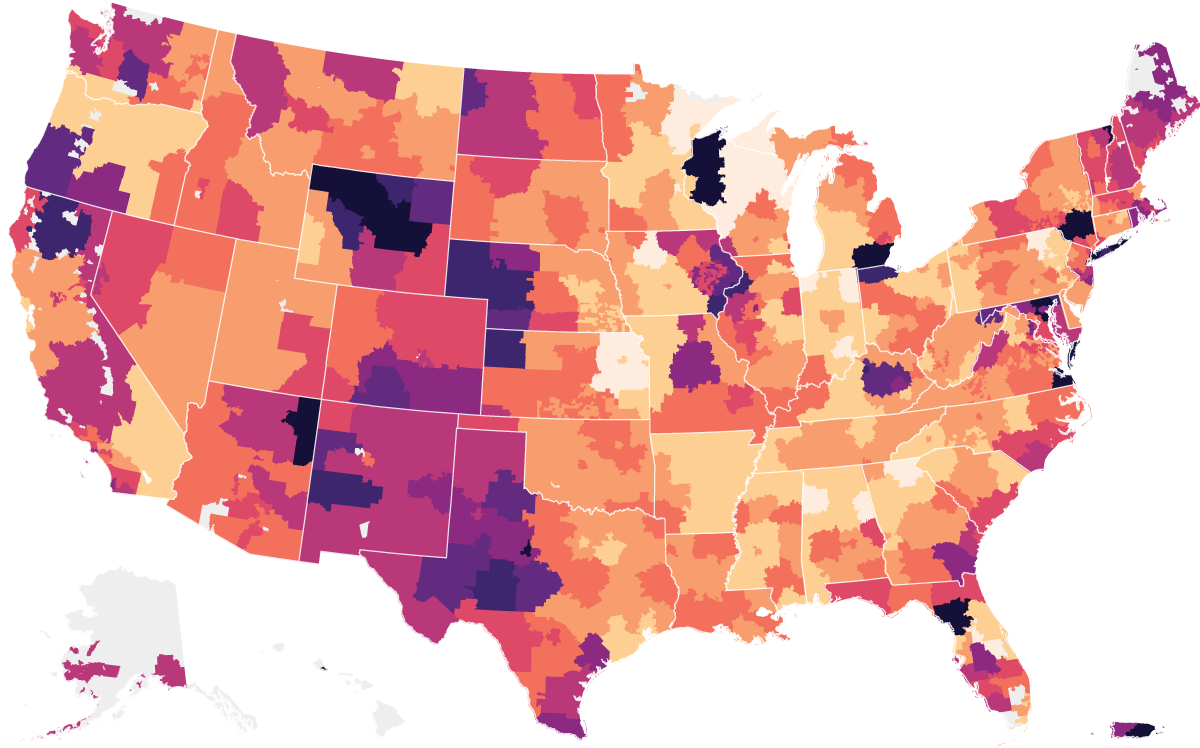 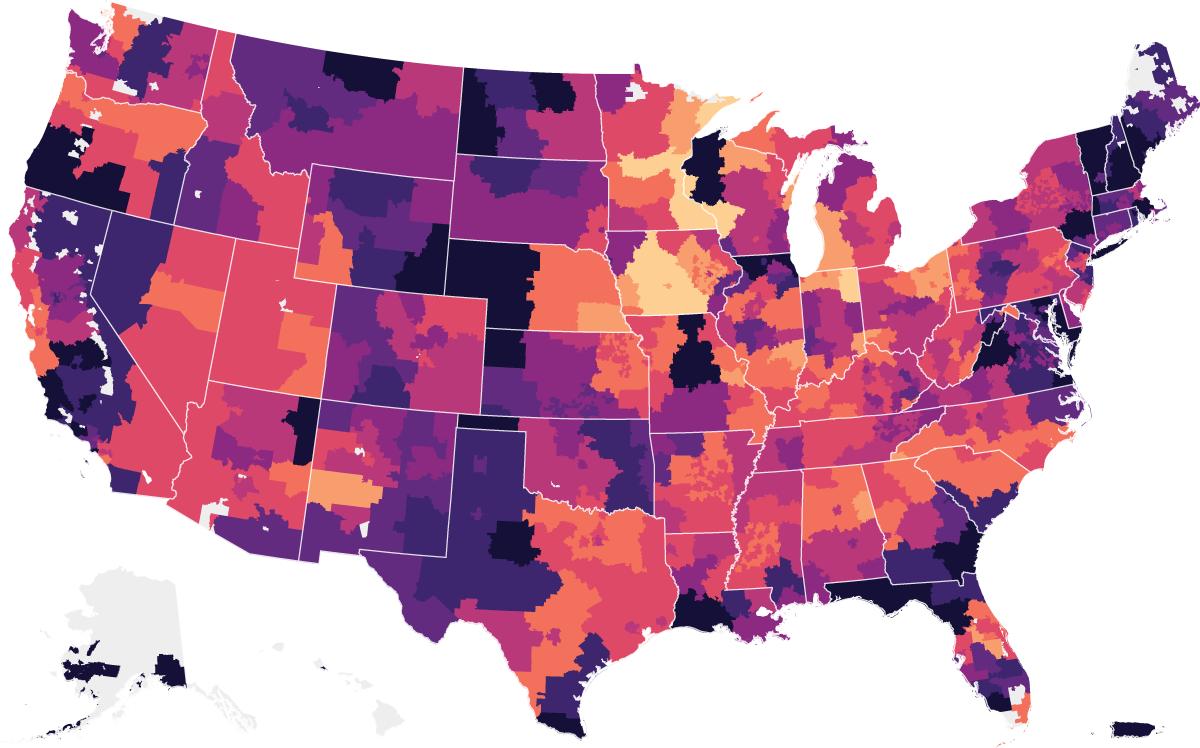 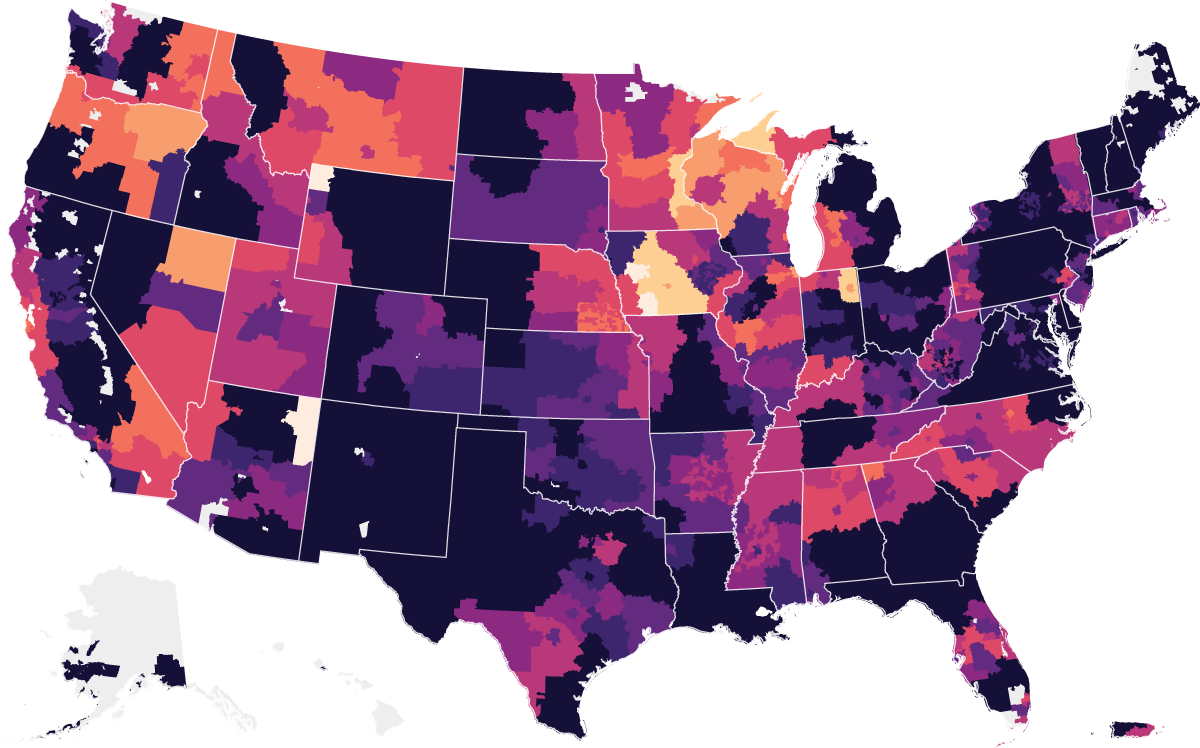 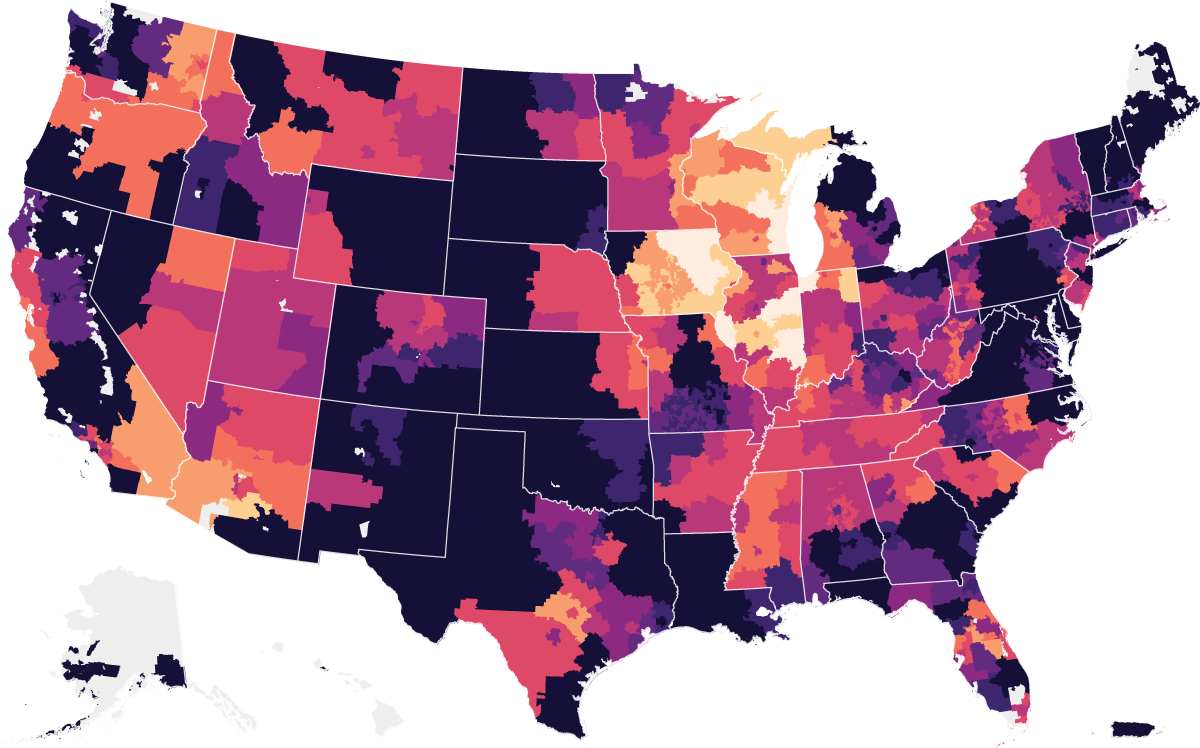 SnailWorks and other firms can monitor mail performance because the Postal Service allows commercial mailing companies to track bar codes printed on every piece of mail, following it through processing facilities and into the hands of mail carriers. SnailWorks can’t see what happens once the mail carrier takes the mail out on a postal route. But recent Postal Service data suggests that delays in that “last mile” of delivery represent a small fraction of the recent slowdown.

The mail measured in our charts was sent from four cities: Miami, Milwaukee, Salt Lake City and Frederick, Md. Because postal performance varies locally, this data may not reflect the national picture perfectly, though the overall trends match national data from the Postal Service fairly closely.

Mail out of Milwaukee slowed this summer, while mail from Salt Lake City was less affected.

Official election mail is clearly identified by logo and is increasingly tracked using bar codes by election officials. Those signals, election experts say, should mean that ballots are relatively protected from broader slowdowns in the mail network. Postal employees have been instructed to expedite ballot delivery, as they have in past elections. The employees are supposed to maintain logs of election mail and sweep processing centers for it each night.

An inspector general audit conducted during the May and June primaries, however, found some facilities weren’t following those policies.

“That’s what has me worried,” said Tammy Patrick, a senior adviser for elections with the Democracy Fund and a former Arizona election official. “In the past there was oversight, and there were repercussions when those policies were not being maintained.”

Mr. Sauber, the letter carriers union official, who is also involved in the National Vote at Home Institute, said he didn’t think the recent slowdown was motivated by a desire to undermine the vote. “If you really wanted to sabotage the election, you wouldn’t do it in July and August,” he said.

Mr. Hogrogian, the president of the mail handlers union, who is part of a task force to ensure the speedy processing of mail-in ballots, said he was confident the Postal Service would be able to manage election mail, thanks in part to the reversal of this summer’s policies. Ensuring quick processing of election mail is a high priority for postal workers, he said.

But he worries about what will happen to postal performance afterward, when Mr. DeJoy has said he will resume making changes to the system, and when politicians and journalists turn their attention elsewhere.

“We’re waiting for the shoe to drop,” he said.